Sunshine in the north!

In English for a change!

A friend studied Finnish climate, comparing it to the rest of a Europe. I did some reading myself, and results are interesting. Data is from here (thanks Slaven for digging that up!)

First here is a chart of sunny hours in some European cities (same graph as in previous blog, except I added average from other cities than Helsinki): 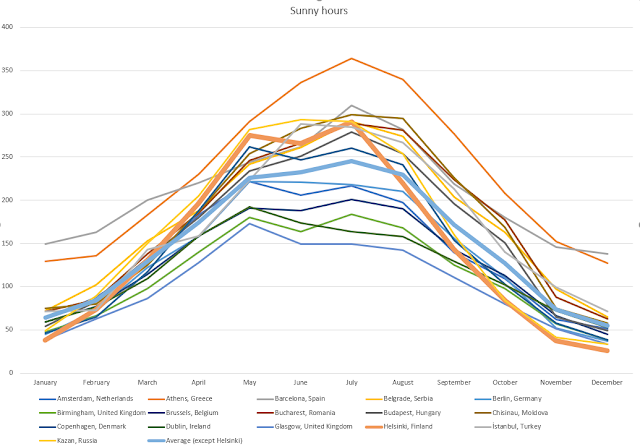 To simplify things, here is the same with less cities: 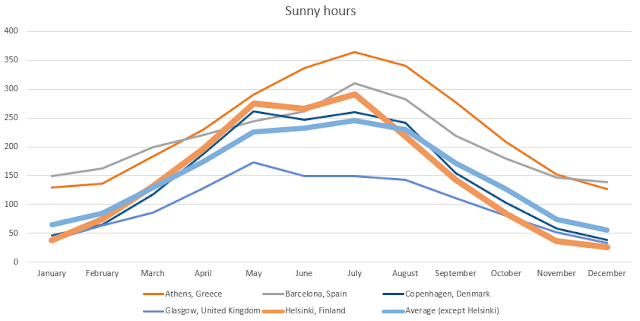 Athens is the sunniest, Glasgow is the darkest city in the data. In the summertime Helsinki does very well. In the December and January Helsinki is the darkest city, and of course if we go even more north, there will be no sunlight at all during winter months.

Trees are more or less dormant in the winter, so who cares about winter months! Here is the same chart of only summer half of the year (I know in Southern Europe active growing period starts before April and ends after Septemper). 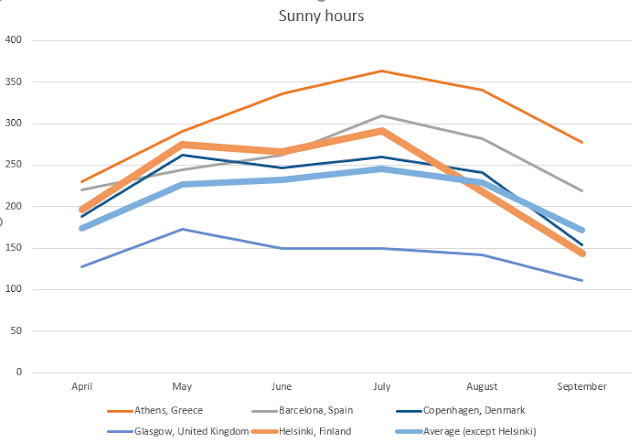 Thing look rather nice for Helsinki. To summarize, we have a long winter, but we also have very good but short summer. Last three summers have been cold and rainy, but I try to be positive here!

I believe above has some implications. Growth period starts at April, and autumn really starts at the end of August. If all goes well, we get 5 months of active growing period. Autumn is very long, dark and rainy. Often weather as about the same from September to Chrismas, just getting slowly cooler. There may be several short periods when temperatures are below zero.

It may sound strange, but I needed to see charts above to fully understand, that often we can not do things like they are done more south. For example,